The decision to get a tattoo that matches that of another person is serious. With a best friend or significant other, you can never be sure if the bond will remain forever, unlike with a mother-daughter or sister tattoo where the person you’re getting it with is literally by blood.

But if it’s true love and this person means a lot to you, why not get tattoos that reflect your shared history together? Sharing the same memories and inking them to your body is more romantic than anything else.

According to studies, couples who get matching tattoos see them as a symbol of their union; they are effectively saying, “This is a relationship that is vital to me,” and isn’t that easily the most romantic thing ever?

So what are you waiting for? Get matching tattoos today here at Pearl Lemon Tattoos.

Book a call or an appointment today. 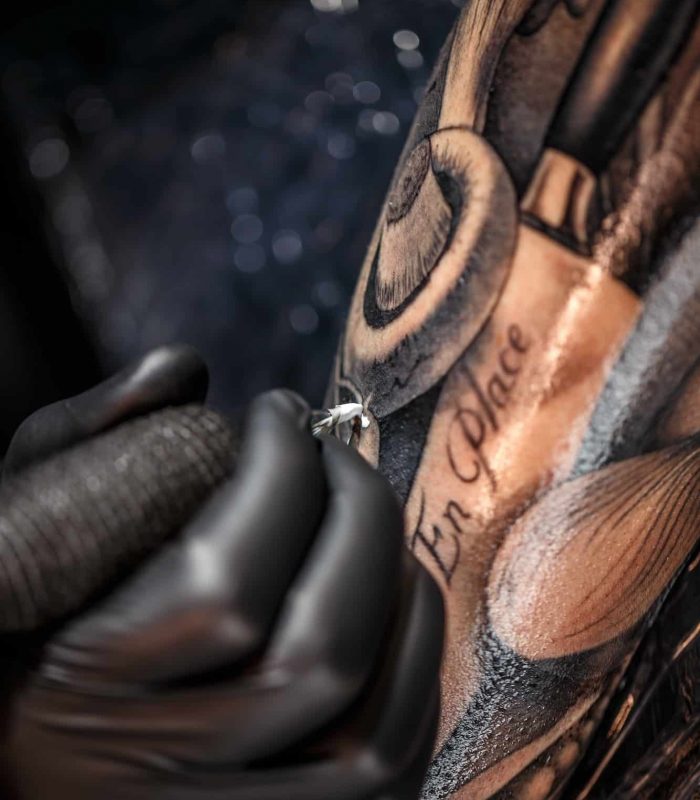 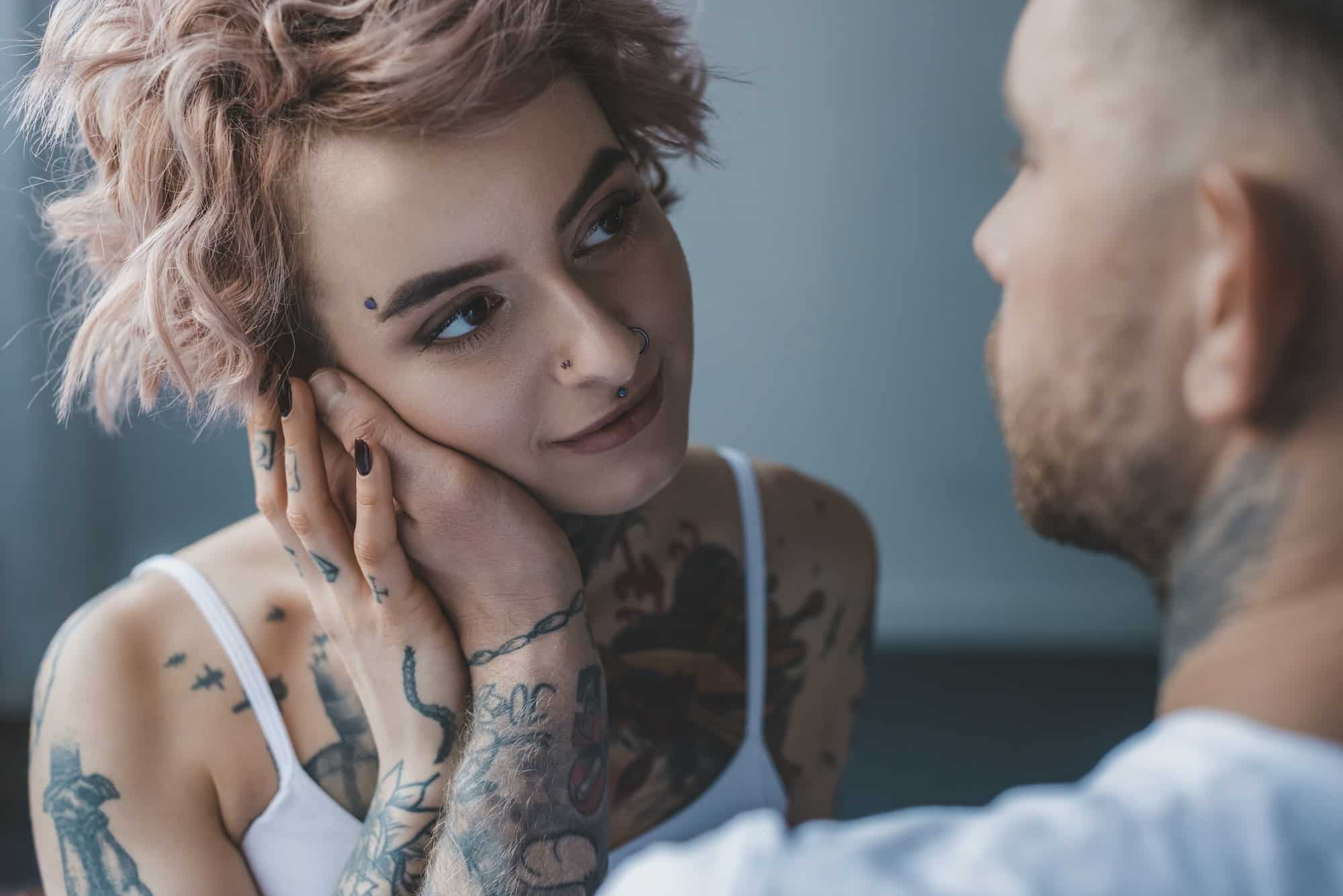 There are many different motivations for couples to acquire identical tattoos. Couple tattoos are often gotten to commemorate an important relationship event or symbolize a bond between two people. Some couples get tattoos to show the world how much they care for one another; it is also a great show of everlasting love for a married couple or when they’re getting there.

We understand that you couples choose different designs specific to your relationship. But if you plan to get matching cute couple tattoos, especially those minimalist ones, and you still don’t have specific designs, we have compiled a list of the best couple tattoos we have seen so far. Feel free to look at these designs that fit together perfectly and tell them to our tattoo experts on the studio after!

This couple's tattoo becomes unique if the crowns are used as a symbol. Adding a date to the design is also a good idea. It could be the day of your first date or the day you married. A small amount of personalization will make a big difference.

Even though a picture is worth a thousand words, a short quote can also tell much about how you feel about someone. Scroll down to see some of the best matching love quotes and more tattoo ideas for couples that use quotes.

A sweet thing to do is to tattoo your partner's initials or the first letter of their name. If you're going to get married soon, we think it's a sign of commitment to have the date written on both of your ring fingers.

The tattoo symbol "infinity" means "forever." It's a never-ending loop that never starts or stops. Because of this, it's a popular way for couples to show their love for each other that will never end. This tattoo also signifies that your love is unlimited, has no limits, and will last forever. The infinity symbol is not only a powerful and meaningful tattoo, but it's also an excellent design for both men and women. It works for any couple because it is neither too masculine nor too feminine.

Let's be honest: you and your partner won't always have much in common. Even so, it's not always a bad thing. Who wants to date a person who is just like them? Celebrate the things that make you unique by getting tattoos that go well together, like this rising moon and sun pair.

Yin and Yang is an old idea that means two different parts that go together perfectly. Yang is masculine, while Yin radiates feminine energy.

When they come together, they form a complete circle. Yin Yang tattoos for couples work well for two people who are different in many ways but whose differences make them work well together. In the end, this tattoo is about how you balance each other out and make your relationship stronger than the sum of its parts.

Love and Disney movies can make you feel like a child at heart. People call Disneyland "the happiest place on Earth" for a reason. Every year, dozens of weddings and engagements occur in theme parks worldwide. For Mickey Mouse fans, a Disney couple tattoo is the perfect way to honour your first love or the person who makes you feel like a child again. It's also an excellent way to remember where you got engaged or married.

Han Solo and Princess Leia from Star Wars are a favourite on-screen couple for many people. This couple is known for their funny back-and-forth and sense of independence, which hides the fact that they are also very romantic and emotional. A Star Wars couple tattoo is perfect for fans of the classic sci-fi series, and it will also show how much you care about each other. If you choose this ink, may the Force be with you!

In every relationship, it's important to keep reassuring each other. What better way to reassure your lover than to get it inscribed on your body, especially in a visible location?

A subtle, flowing script on your forearm or the traditional wedding vow on the side of your wrist are both excellent ways to show that you are loyal to each other and will keep your promise.

In place of a traditional wedding or promise ring, a simple line tattoo on the fourth finger can be a modern and unique option.

Every passionate couple needs a sexy couple tattoo. This kind of tattoo shows how you both feel about each other. There are many different kinds of sexy tattoos. One classic idea is to have your partner's initials tattooed on your hip, thigh, or chest. Another idea is to get a special symbol tattooed on your sides so that you can only see it when you're naked.

However, if you have another couple tattoo idea in mind, that’s alright we can still ink it on for you. All you have to do is show our tattoo artists your design and they’ll get it done. Ask them today to be sure!

Tattoos are a great way to commemorate your relationship that conveys a message of love, most specifically eternal love, that you are ready to show the world.

A tattoo is a piece of body art that may be a simple yet a bold statement depending on your choice, be it a low-key tattoo, simple black ink tattoo, ring tattoo, or some one-of-a-kind funny matching tattoo that makes you laugh.

What better way to honour your special bond than getting inked with matching tattoos? We’ll get your meaningful couple tattoo on your skin smoothly and safely when you book an appointment with us. 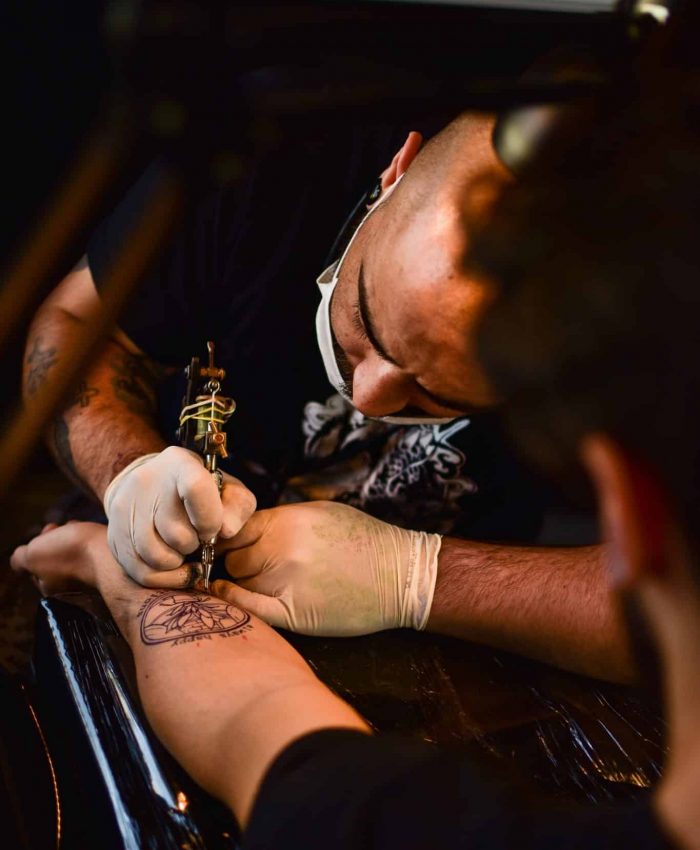 What are some lesbian couple tattoos you can recommend?

Tattoos representing a couple's love and devotion to one another are increasingly common. Whether you want something compact, straightforward, elaborate or voluminous is up to you.

Tattoos have a strong tradition within the LGBTQ community. Secret messages were sent using gay-tattoos; many LGBT people today sport tattoos of well-known LGBT symbols in the hopes of being identified by others who share their identity.

That's the appeal it had for lesbians and queer people back then and still might have. Having an obvious sign of one's identity as LGBT might be facilitated through tattoos. Maybe it's because tattoos allow people to express themselves and their values to the world.

Nowadays, tattoos can be tasteful and even endearing in their visual appeal. It has entered the mainstream stage in a big way.

You can get a couple of rainbow-themed tattoos, some scissors tattoo (wink wink), or a bold statement like "love wins" for you and your wifey.

Although everyone has a different pain tolerance, tattoos are uncomfortable for most people. There are also some spots on the body where a tattoo would look very grand. However, this is not a significant issue that needs immediate attention. Away from you, the sorrow is simple to contain. How?

Using an anaesthetic can make it possible. You can receive a tattoo without discomfort if you use a topical anaesthetic product like NumbSkin lotion. Make sure the product complies with FDA standards. Using this product will aid in alleviating discomfort.

Can our tattoo be removed?

This is hardly a romantic gesture and question, but it serves a valuable purpose. Ahead of time, you should know how likely it is to be removed, how challenging it will be, and so on. The good news is you can eliminate that tattoo regret in several ways. Laser therapy is one of the most promising approaches. Utilizing a high-intensity beam aid in dissolving the colour. But keep in mind that it will be a trying time for you.

Fortunately, we also offer tattoo removals here at Pearl Lemon Tattoos, all you need to do is book a call today.

We'd Love To Hear From You!